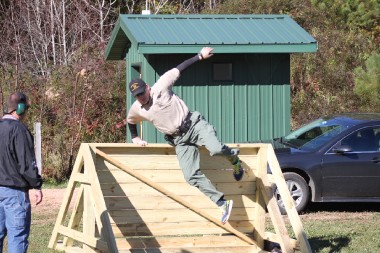 This year's event was held at the Portage County Sheriff's Department Rifle Range in Stevens Point and the top five winners were:

Course Details:
•    Competitors ran 200 yards.
•    During the second fifty yards, the competitor dragged a sixty pound tube of sand in a sea bag and continued with the run.
•    For the last 50 yards, the competitor scaled a four-foot wall continued on to shoot their rifle.
•    Competitor shot a rifle of their choice, with or without optics, at a target 70 yards away from a shooting position of their choice five times.
•    Competitor then transitioned to their service pistol, shooting at a target five yards away while standing three rounds, then change magazines and fired again three times at a target seven yards away.
•    Rifle was staged at the firing line. Magazine was in the magazine well, chamber empty, safety on. Competitors did not run with their rifle.
Point System:
•    100 points were awarded for participants who completed the course in thirty seconds or less. For every second over thirty seconds a point will be deducted.
•    110 points total were awarded for shooting. The maximum point per shot was ten.
•    Total shots fired was eleven.
•    The total overall points is 210.

The A.L.E.R.T. Law Enforcement Challenge was FREE to member law enforcement departments of the County Mutual and Community Insurance Corporation and included a timed skills challenge, all training sessions and lunch.

Individual prizes were awarded to top finishers and cash prizes awarded to the top finishers' departments. The first place finisher's department received $10,000; $8,000 for second place, $6,000 for third place, $4,000 for fourth place and $2,000 for 5th place.

Share!
Enjoy the article so far? Recommend it to your friends and peers.